Below are a select group of interviews and articles about the Graffiti of War Project, please view and share. All the interviews and PR in the world won't bring this project to success with your support. WE NEED YOU to ensure the success of this project. Please contact us at info@graffitiofwar.com to help spread awareness for the project in your area and around the world.

The Graffiti of War - seen & published In the Following

Creative Arts Project presents program illustrating the experiences of war and this spring program proved to be an awe-inspiring and thought-provoking mix of mediums offering many perspectives on combat and the military.
Hosted by the Department of English and Philosophy, the events included the Graffiti of War art exhibit and the GI Film Festival, which featured panel discussions with directors, producers and special guests.

Based on his two deployments to Iraq and one to Afghanistan, Army Staff Sgt. Stephen Quarles can tell you the best place to gauge unit morale: the latrine. It is often only there, in a plastic shell perched atop a stinking pile of waste, that a soldier at war can truly be alone, a place where thoughts can be expressed via written words or drawn renderings. No bellowing first sergeant, no officers to salute. When things are going well, writings include “82nd kicks ass,” Quarles said. “When things were going bad, it was ‘time to go home,’ or ‘we hate it here.’ ”

Click HERE to Read the Full Article on Stripes.com

Interview by Fox News Correspondant, Jonathan Hunt, of Jaeson "Doc" Parsons discussing the Graffiti of War Project's National Art Exhibition opening on Veterans Day in Pennsylvania. In addition, the interview raises awareness for those veterans and military members suffering from the invisible wounds of war, PTSD and TBI. Click HERE for the entire interview.

Click HERE to Read the Full Article on Defense.gov

He left a promising career in finance, joined the Army after 9/11, overcame Post Traumatic Stress Disorder, and started a non-profit to drive money toward PTSD research—but he's convinced the media's not giving him a chance. "Sometimes it feels like I keep hitting walls," he says. "It seems people are just ready for all this to be over."

This Week on War News Radio: The Art of War

Jaeson "Doc" Parsons speaks with Elliana Bisgaard-Church from War News Radio during the Graffiti of War Project's summer expedition to Kuwait and Iraq discussing the art, the war and the experience of returning to the warzone he deployed to with the 54th Engineer Battalion in 2006.
Click HERE for the Full Interview

On Iraq's Walls: The Graffiti of War
by Lena Groeger 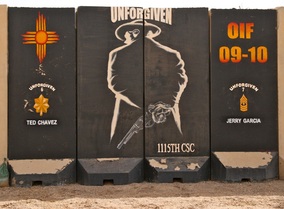 U.S. forces are scheduled to depart Iraq in December. But on the giant concrete barriers that still ring the constellations of bases around the country, their artistic footprint will remain.

Over the past eight years, all around Iraq, troops turned the jersey barriers and t-walls designed to protect them from insurgent attacks into concrete canvases. Sometimes the pictures they painted chased the monotony away from the landscapes of their deployment. Other times they spelled out what their service meant to them, honored a fallen friend, pined for home, or bragged  about their units.
Click HERE for the Full Article

The Graffiti of War

From war, art. This is the basic premise of The Graffiti of War , a project from two combat veterans that features the unconventional military art that soldiers, seamen, marines, and airmen (and women) create during deployments. From tanks spray painted with "I love u baby" to memorials for the dead to enemy jets covered in graffiti, every art work tells a story.
Click HERE for the Full Article

October 19, 2010
Please click HERE to obtain permission to use any of the content on this site or for general press inquiries. Use without expressed permission is strictly prohibited.