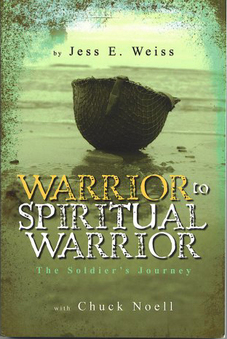 The Soldier's Journey, is the story of Jess E. Weiss, and the fifty-year journey that transformed him from a battle-weary WW II soldier into an author and modern mystic. It is a rare and remarkable personal story of spiritual healing. Jess is a multi-decorated member of the Greatest Generation, one of the few combat soldiers from the landing at Omaha Beach, D-Day, who lived to tell the tale. This book is not about the blood and guts or the glory of a soldier's life, it is about coping with death and dying by the numbers, surviving fifty years of "Why me?" Survivors guilt, and the ravages of Post Traumatic Stress (an impairment that didn't have a name in World War II). It is the tale of how one soldier climbed out of the dark pit of debilitating physical and mental injury to forge a path of spiritual resurrection and transformation for himself. Whether you are religious, spiritual, or simply concerned about the long-term effects of war, this book will inspire hope and renew your faith in what is grand and great about the human adventure.

"This book is important for anyone trying to understand PTSD especially after World War II. It illuminates the struggle of the World War II veteran who never received the understanding of the emotional scars they brought back from the war. A necessary read."
-Carol, daughter of a D-Day survivor

About The Author:  Jess E. Weiss

Jess E. Weiss is a World War Two veteran with combat experience in North Africa, Sicily, and Northern Europe.  He served with the First Division, 16th Infantry (“The Big Red One”) and was part of the second wave landing at Omaha Beach on D-Day.  He was wounded during the Battle of the Siegfried Line, Germany, and received (among other medals) a Silver Battle Star, a Bronze Star with an Oak Leaf Cluster for heroism on Omaha Beach, a Purple Heart, and an Expert Rifleman’s Badge.

Jess was the first National Service Director for the American Veterans Committee. Today, he is the author of The Vestibule/The Original Groundbreaking Chronicle of Near-Death Experiences, The Adam & Eve Fantasy/A Religious, Mystical and Scientific Approach to Knowledge of God, Overcoming The Fear Of Death and Dying/A Sense of Life That Knows No Death (Edition in Braille), A Soldier’s Journey Into Mysticism.


Visit Jess on Facebook: http://tinyurl.com/JessWeiss and check out his website, www.warriortospiritualwarrior.com
Or Email Jess at jweiss10@optonline.net for more information about his incredible story, his book and how you can help!

This review is from: Warrior to Spiritual Warrior: The Soldiers Journey (Kindle Edition)

The following is from the paperback print edition . . .

On the page facing Chapter 1 of "Warrior to Spiritual Warrior" is a photo of two soldiers with their arms around each other. There are big smiles on their faces. Their summer khaki uniforms appear neat and clean. They are standing in grass up to their knees amid blossoms of wild flowers against a background of green foliage. They look like young men on a lark. But if you look closely their uniforms appear to be wet in spots. The caption of the picture reads: "Cpl. Jess Weiss and Sgt. Herb Siegel, on a cliff overlooking Omaha Beach, June 6, 1944 10 A.M."

Soon we learn that shortly before the photo was taken, Weiss, the lone survivor of his D-Day invasion squad, had met up with is buddy, Siegel, who had landed on a different LCI. He had then shot a German sniper out of a tree and retrieved his blank diary book and camera with which the photograph was taken by a passing soldier. Incredible? Could Weiss have misremembered? Was this seemingly relaxed picture taken at another time and place? I wondered until I remembered a photo of myself posing serenely beneath a gaping shell hole in the roof of a German house that my World War II unit used as a CP after our last battle along the Elbe River. Survival in war can bring on giddiness.

There is, however, nothing giddy about "Warrior to Spiritual Warrior." Seventeen pages beyond that photograph we are plunged into the diary Cpl. Weiss wrote into the blank pages of the German sniper's diary book beginning June 6, 1944 and ending September 27, 1944 with these words: "I hope they relieve us before we go into the attack." But there was no relief. Cpl. Weiss was severely wounded. The diary is a deft description of the life of a combat infantry soldier. But this is not really a book about soldiering. It is a story of the aftermath of warfare.

No war ever really ends for its combat soldiers. For Jess Weiss it was a continuous struggle from the moment shrapnel from a German 88 mm shell ripped into the right side of his body. A Horn and Hardart cashier who entered the Army before Pearl Harbor, Weiss lived through the First Division's (The Big Red One) North Africa and Sicily campaigns before storming Omaha Beach and advancing across France into Germany.

Suffering from what we now know as posttraumatic stress disorder (PTSD), Weiss endured a long period of hospitalization at Wala Wala, Washington far from his New York home and the wife he married just before entering the service. While earning a living in insurance he struggled with his war demons, endured alienation from his children, the death of a loved one, contemplation of suicide, and other wrenching events. Through it all he never talked about his combat experiences, which he later came to regret.


This intensely personal book, written at the age of ninety-three, following another about near-death experiences, is a tour of his spiritual journey to find the meaning of it all. It takes him through The Infinite Way philosophy of Joel S. Goldsmith, Christian Science, and finally into Spiritualism. To say more would spoil the suspense of his story and its resolution.

Weiss writes in the cadence of a native New Yorker speaking across a table of a Horn and Hardart Automat in the 1940s. But it is sixty-five years out and he is seeing his life anew in fresh perspective. This is not, save for the diary, a chronological autobiography. The time-line is sometimes wobbly but that is not a drawback. It dashes about like good conversation. In the end you will get the point: war ought to be avoided to the maximum possible and its consequences ought to be weighed much more than they are. Most importantly, those who endure it and survive ought to talk about it more than we of "the greatest generation" chose to do. By being silent we missed the chance to give voice to the terrible nature of war and its awful results.

Cpl. Weiss and I shared some experiences: We are both combat veterans and we both eventually wrote about the war. While he was counting money at Horn and Hardart in New York, I was serving hamburgers and coffee at White Castle restaurants not far away in Northern New Jersey. Back home we were both members of the American Veterans Committee, the progressive, idealistic WW II veterans association with the slogan "Citizens First, Veterans Second." Understandably, it failed. I shared a bit of his postwar trauma: turbulent nightmares and persistent consciousness of nearby low places to dive into in case of artillery fire. Having lost forty-two colleagues, I came back with a fear of commitment and following a plethora of failed romances, including one with a devout Christian Scientist much like Weiss's beloved wife; I didn't marry until thirteen years after the war. Yet that is scant comparison, as readers will know when they come to the end of Weiss's incomparable journey.

This book should be read by anyone interested in personal war stories. Readers with an interest in PTSD will find it valuable and a possible Rx for suicide because, even amid the darkness, Jess Weiss offers sustaining rays of light and hope.

Order your copy of "Warrior to Spiritual Warrior" today!