Official Military Art is the only place you can collect the finest art paintings, illustrations, prints and military posters by artists commission by all branches of the military.  These original works of art are on permanent display at various Navy, Army, Marines and Air Force Bases throughout the United States.

Todd Krasovetz and the Graffiti of War proudly present Todd's latest creation  titled, "Hot Exfil:Dark Angel".
Under a Afghanistan starscape, a USAF Special Operations Forces team exists a CV22 and night to cover fire. If you look close at the teams figures, you will see in their shadows, "Angel Wings" cast from a "Dark Angel". The "Dark Angel" symbolizes a unforeseen, hidden savior among the team. With a full moon in the background, a pair of CV22's fire on enemy positions as this is a "Hot Exfil" . Flanking the CV22’s are a pair of OH-58’s are hidden in the stars ready to strike. 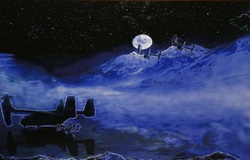 Artist Todd Krasovetz, Official Military Art and the Graffiti of War proudly present the "Wings of Hope Military Art Painting Series"
Wings of Hope is the name of the first original oil painting in a series of military art paintings commissioned by the Marine Corps and the Command at the Naval Hospital Camp Pendleton, CA.  At present there are a total of four paintings that now hang on permanent display at various Marine and Navy bases throughout the US.
The Wings of Hope series proudly commemorates the sacrifices of all those who have served and those who continue to serve our Nation's armed forces. 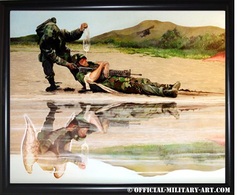 View the above images and more at www.OfficialMilitaryArt.com
Support independent artists!