Mike Teutul and His Art - The Wolf Gang Gallery & Store 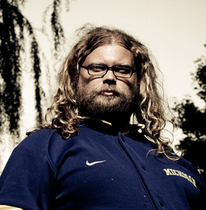 For just over 2 years, Mike Teutul has been turning to art as more than just a hobby. "I started painting about two years ago, out of boredom. I was working at Orange County Choppers, and I was sort of aimlessly wondering what to do with myself. I felt like a kind of Vegas act, waiting to meet and greet people at the door. The producer Adam suggested I do some portraits of the cast and crew, people I'm very fond of. So I started painting everybody. I didn't think anyone would want to buy any of my art, I just wanted to paint."

According to his website, he found his new passion was more than just fun. "I really enjoyed it, and I found it therapeutic. I became obsessed with it, and that was probably a good thing. If I don't concentrate my addictive behavior on something positive, it will definitely go to the negative, I don't make any bones about that."

This is what would bring the Wolf Gang Gallery and the Graffiti of War Project in contact with each other. Many of our staff, specifically our founder, Doc Parsons and his wife, Melissa, are avid fans of the American Chopper series and especially of Mikey Teutul. He's funny, kind and most of all, he is relatable. After watching the series this past year, we got the idea to contact Mike because of his gallery and our upcoming National Exhibition.

﻿T﻿hough his curator and gallery manager, we were able to work out a tenative date in February to bring the Graffiti of War Project's National Exhibit to Montgomery, New York to further help our efforts to raise national awareness for those suffering from the invisible wounds of war, PTSD and TBI.

For More Information on How to Order Prints or Commission Original Work from
Wolf Gang Gallery
-Visit-
www.TheRealMikeyTeutul.com
-Or-
Email jenny@therealmikeyteutul.com

Images and text used with permission and copyright of Wolf Gang Gallery & Store.